A Humanoid Robot by Matt Bauer

Posted on September 14, 2014 in Sherline Projects 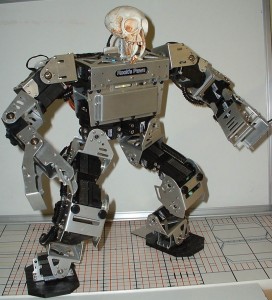 Matt Bauer found that CNC made many aspects of building the parts for this robot much easier. Not bad for a first project in CNC. The sabertooth skull is a nice touch…

Matt Bauer was not a machinist and had never worked with CNC when he purchased a Sherline CNC mill and a lathe. It didn’t take him long to get the hang of it, and the robot shown above was his first project. He describes the process best in his own words:

“Shortly after our return from the ROBO-ONE 10 competition in Japan last Fall, I purchased the Sherline model 2010 CNC Mill and 4410 CNC Lathe. Having no previous CNC experience, I was surprised how fast I was able to learn the necessary techniques needed to operate the machines. No longer than a week into it, I decided on scrapping our previous robot design entirely. Before that I was forced to fabricate all the aluminum brackets using a band-saw and drill. The parts created for a humanoid robot are mostly mirror images of its other half, so the CNC capabilities of your machines allowed me to easily duplicate opposing sides and made short work of the intricate designs I was ultimately going for. In a nutshell, this 24 servo humanoid robot consists of 45 aluminum; and 27 delrin parts all done using the Sherline mill and lathe. I was even able to add a little flare by engraving his name in an acrylic backlit marquee located on his chest. Pictures say a thousand words, so here is a pic of our completed humanoid robot dubbed “Rook’s Pawn III”. He stands 19” tall and weighs about 5.0 lbs. He will be attending RoboGames very soon, and we plan on returning to Japan in the Spring to compete against some of the best humanoids in the world. Thank you.”