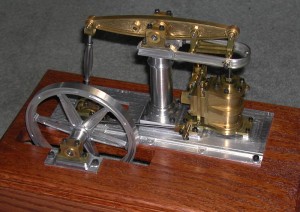 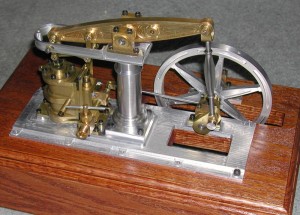 The “Baby Beam” Steam Engine is almost finished. No, the final engine will not have SHCS (socket head cap screws)! It was inspired by the M.E. Beam engine published in ’59, which was scaled from the 1914 M.E. article by George Gentry. George did an accurate prototype model of the engine. I’ve heard that it is of the form of engines designed by William Fairburn in the 1840-1850 period.

The engine is approximately 6″ tall, 11″ wide and 6″ deep. Shown is a 5″ CNC’d flywheel, and the plans include an optional 6″ flywheel of an alternate design. This engine was built using many CNC part files and was entirely machined on the Sherline mill and lathe. This version was built with a brass cylinder, steam chest and beam, although aluminum could be used as well. The base is aluminum, and, although 10″ long, was machined on the Sherline mill as well!

The bore is 3/4″ and the stroke is 1 1/2″. The design incorporates a slide valve driven through considerable linkage. The piston drives the 6-1/2″ beam through the Watts parallel motion and is a joy to watch. 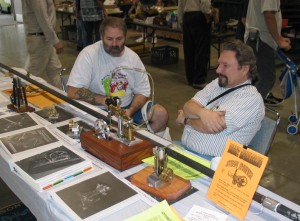 Alan (Right) shows his engine at the 2004 Men, Metal and Machines show in Visalia.

This article first appeared on the Sherline CNC Projects Page.